The East Midlands doesn't exactly scream excitement in the same way that some other counties do. Instead of full on trumpets and glitter the East Midlands has a gentle hum of activity. There can often be times when you are twiddling your thumbs, don't get me wrong the Peak District is a beautiful place, but there truly is only so many times you can go for a walk and 'oh' and 'ah' over it.

However there are times when the East Midlands have got reasons for trumpets and glitter, and the Summer Nights Film Festival is one of them. Taking place throughout August and going a little bit into September this festival takes the big blockbusters and nestles them into the countryside. Using a few of the local Stately Homes and Halls as the hosts a giant screen is put up and a massive film put on. 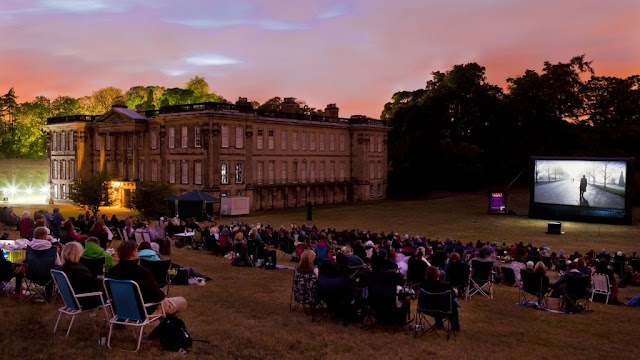 The event is run by The Derby QUAD & Cinema and you can find a list of the films being shown and the dates for this year here.

Mr M and I went last year to see the King and I. It rained. But, it was real good fun. I will say though if you are going take a blanket as well as a coat.....maybe a hat and scarf too! It gets quite chilly. Take some comfy camping chairs and take some food, it's a great opportunity for a posh picnic!

Mr M and I are hoping to see the Skyfall showing, so if you're going I'll see you there.....I'll be the one  fat from jumper layers and a giant flask of hot chocolate! I'll blog about it once we've been!